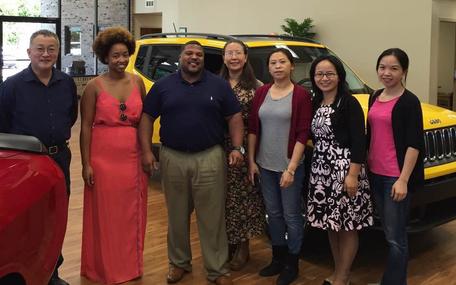 With no doubt in his mind that he identified his issue, he began researching clinics that specialized in ALS. The closest one was in Hilton Head, South Carolina. With his wife and children in the car, he traveled to meet someone who he hoped would have answers. After the consultation, the doctor confirmed that he was suffering from ALS and informed him that he was in the early stages. Unfortunately, there was, and still is, no known cure for ALS so the physician was only able to offer chelation treatments. Jermaine and his family traveled frequently for the treatments but his condition did not improve and costs became less affordable so he made the decision to terminate his chelation treatments.

From this point onward, his symptoms worsened and his condition became less and less bearable. He continued to suffer from worsening involuntary tremors that now affected his facial muscles. He was unable to even make a fist with his hand and completely lost his appetite.  Due to all of the stress and pain, Jermaine began to lose the aspects of his personality that his family distinguished him by. Instead of being sarcastic and playful, he became weary and hopeless. To make matters worse, his primary care doctor, who still denied that Jermaine had ALS, referred him to a hematologist because his blood became extremely thick and viscous. His hematocrit levels were sky high so his doctors began taking two pints of blood from him twice a week for testing. Due to the findings in his blood, the doctors falsely suspected Lyme disease. Finally, Jermaine's physicians had a meeting with him and told him that he did, in fact, have ALS and that he should not expect to live much longer. After Jermaine completed the difficult task of breaking the news to his wife and children, they cried for a very long time. Then, they prayed.

During 2009, he and his family drove to Hoschton looking to visit a known novelty shop but when they arrived, the store was closed. As they were leaving the area, Jermaine saw a sign that said "Herbalist," and decided to satisfy his curiosity.  He and his family walked into what they believed was just an herbal shop and began explaining Jermaine's symptoms to Dr. Cool and Mrs. Shirley. "Stick out your tongue," Dr. Cool said after listening to Jermaine. After observing the white coating and involuntary movement of his tongue, along with his slurred speech and dry throat, Dr. Cool was able to tell Jermaine the majority of his other symptoms.

Dr. Cool tailor made herbal tea formulas for Jermaine, performed Magipuncture treatments, told him to drink at least one gallon of water each day, remain positive, and pray.  The teas were specially formulated to perform the specific tasks of Meridian Warming and Yang Tonifying. The teas also worked in harmony with, and enhanced the effectiveness of the Magipuncture treatments. The Magipuncture treatments target the heme centers throughout the body, specifically those found in red blood cells and enzymes, in this case; sulfite oxidase. ALS is a malignant cell disorder associated with the overproduction of a monoclonal antibody, immunoglobin, and targeting sulfite oxidase inhibits the production of this antibody.

After receiving the treatments and forcing himself to change his hopeless mindset, Jermaine was determined to live and his symptoms began to improve. Every single day, he would drink his herbal teas by the gallon and surprise his family with his improvements.  One day he would point out the lack of tremors, the next he would point out the lack of pain, and the next he would point out muscle growth until he became so accustomed to getting better that he wasn't surprised anymore. By the end of 2010, he was supposed to be wheelchair bound, instead, he was revived, renewed, refreshed, revitalized, and benching 500 pounds again.

Reviving My Life from ALS

As the son of a successful boxer, Brown Sugar Shank, Jermaine grew to be an ideal model of health and fitness. Frequent exercise and an organic diet were as natural to him as breathing so when he began to notice minor changes in 2007, he was unsettled.  He became weaker and weaker while having headaches that intensified over time so he decided to seek medical attention. By the end of 2007, even though he went back and forth from doctor to doctor, his symptoms progressed to include involuntary muscle tremors, most severely in his eyes. The different physicians he visited presumed many different things about his condition. One said that he may have had lupus while another said that he was just a hypochondriac experiencing stress. In October of 2008, Jermaine was referred to a neurologist who administered a nerve conductivity test. The results: inconclusive. The neurologist told Jermaine that it was unlikely that he had ALS because he was too young but did inform him that something was terribly wrong. At this point, he began to experience muscle atrophy throughout his body, most severely in his back. He continued to experience intensifying involuntary muscle tremors that even began affecting his tongue but his doctors were still unable to nail down a definite diagnosis due to his age. In November of 2008, the neurologist wrote a letter proving Jermaine's disability so that he would receive supplementary income to replace his lost wages due to inability to work. With decreased faith in his physicians, he began researching the possible cause of his symptoms on his own. All of his research pointed in one definite direction: ALS.